Welcome to the Southwick Associates November 2011 newsletter focusing on the economics, business and statistics of fish and wildlife and their associated outdoor recreation.

Conservation, Recreation and Preservation Generate an Impressive $1 Trillion per Year for U.S. Economy

A new report, authored by Southwick Associates and commissioned by the National Fish & Wildlife Foundation (NFWF), reveals that officials looking for cost-effective ways to stimulate the economy should look no further than out their own windows: the great outdoors and historic preservation generate a conservative estimate of more than $1 trillion in total economic activity and support 9.4 million jobs each year.

“As a former Secretary of the Interior, governor, senator, and mayor, I have witnessed firsthand how historic preservation, conservation and outdoor recreation result in tremendous benefits to our nation’s economy,” said Dirk Kempthorne. “This study is a valuable tool for reaffirming and quantifying those benefits.”

The report is packed with information. Highlights include:

“It is important to note that, unlike many studies released in recent days that attempt to project future jobs to be created by yet-to-be enacted legislation, the jobs and benefits we report currently exist. Any jobs associated with future conservation investments would be over and above the figures reported here,” reported Rob Southwick, President of Southwick Associates, who authored the study.

Based on requests from various companies in recent years, the Media Monitor was launched to track sportsmen’s use of television, print, web and social media. Below are just a few examples of the types of information reported by SAMM: 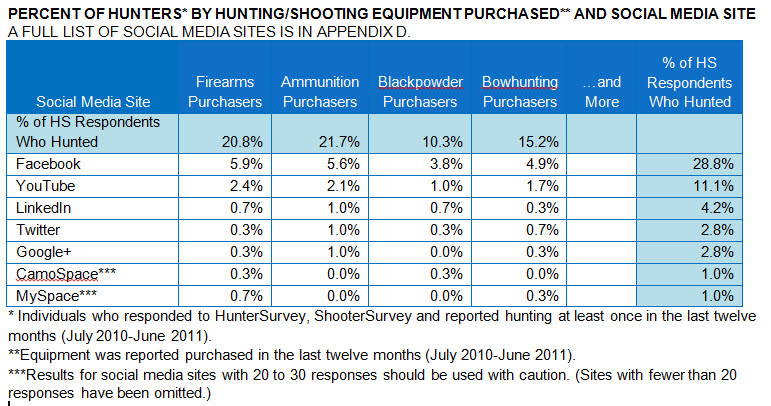 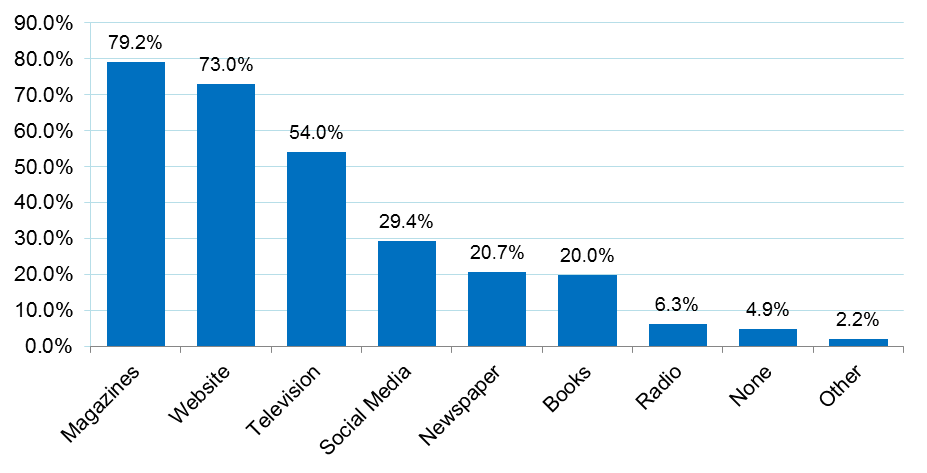 SAMM can also rate media properties by their audience’s:

If you are interested in utilizing SAMM to compliment your efforts, you can obtain results or discuss customized research by contacting Courtney Olson at Courtney@c2csalesandmarketing.com or 303-955-2194.

As one of the few states not allowing hunting on Sundays, the state of Pennsylvania is currently debating if Sundays should be open to hunters and if so, under which conditions. Many reasons are argued including tradition, family recreation benefits, and economics.

Hunting is a deep-rooted tradition in Pennsylvania. Each year, 950,000 licensed hunters take to the field and woods, nearly three times the number of people who live within the Pittsburgh city limits. One of 14 state residents holds a hunting license. Each hunter on average spends $1,800 annually on gear, trip expenditures and preparations. With nearly 1 million hunters, this adds up to $1.7 billion in retail each year for the state economy. Considering the multiplier effects as these dollars exchange hands, Pennsylvania enjoys 27,500 jobs and $210 million in state and local tax revenues courtesy of resident and non-resident hunters.

A 2005 survey by Southwick Associates showed 43 percent of Pennsylvania’s hunting takes place on Saturdays. In the same survey, Pennsylvania hunters reported they would hunt 27 percent more days if Sundays were available.

This summer, Southwick Associates updated the estimate of Sunday hunting’s economic potential. If Sunday hunting was allowed in the 2010-11 season, Pennsylvania would have enjoyed:

While some of these impacts may occur if hunters engage in other activities on Sundays, the state will still experience a gain. Considering the top competitor to hunting is watching TV, according to soon-to-be released NSSF research, the economic impact created by the dollars associated with watching football or NASCAR on Sundays will be lower compared to dollars associated with a day of hunting. The opening of Sundays is also expected to encourage more residents to hunt who otherwise are obligated elsewhere on Saturdays, and to encourage current resident and non-resident hunters to spend their weekends pursuing game in-state rather than in neighboring states who offer the additional day. Even if Sunday hunting was only permitted during the two Sundays of the general firearm season for deer, 3,300 jobs are expected, along with the $23 million in additional tax revenues. Just like any business, providing greater opportunities to customers to enjoy a product will create more sales and greater economic impacts. Pennsylvania now has the opportunity to serve its hunting community and the state economy.

One Reason to Look Forward to 2012 — New Results from the National Survey of Fishing, Hunting and Wildlife-Associated Recreation Will Provide New and Better Data

Every five years since 1955 the U.S. Fish and Wildlife Service (USFWS), in partnership with state natural resource agencies, has conducted the National Survey of Fishing, Hunting and Wildlife-Associated Recreation. The results provide the data needed to quantify the economic impact of wildlife-based recreation, and is considered to be the most important source of data on fish and wildlife recreation in the United States. Federal, state non-profit and private organizations rely on the Survey to manage fish and wildlife, develop marketing and communications plans and analyze trends.

Southwick Associates, Inc. specializes in natural resource & environmental economic, business and statistical research.  Our staff is comprised of economic, business and statistics professionals throughout the U.S. who have in-depth experience measuring the values, benefits and revenues possible from fish, wildlife, and water-related natural resources plus their associated industries.  We can help clients better address many business, legal, legislative and public communication issues through the practical application of reliable and accurate economic information and statistics.