FERNANDINA BEACH, FL. —Based on public reports filed by manufacturers, demand for ammunition has been in decline. Several possibilities have been cited as driving this trend, including a firearm-friendly White House and U.S. Senate which has reduced the fear-driven sales seen prior to the 2016 election. Many in the trade speculate that consumers previously purchased excess ammo and now are ‘shooting through’ their surpluses. But what do ammunition consumers say about the matter?

According to a survey of active hunters and recreational shooters by Southwick Associates, the nation’s leading outdoor market research and economics firm:

Five percent of respondents weren’t sure of their spending trends over the past three years.
While only a third of active ammunition consumers report spending less than they did three years ago, the difference is in the size of their purchases. On average, those who report spending less have reduced their annual purchases (in dollars) by 38%, while those who report buying more are buying only 23% more. When combined, the net effect of the two groups translates into a roughly 2% decline in overall retail ammunition sales. The differences between manufacturers’ reported declines and the numbers reported here can be attributed to this survey’s orientation towards more avid spenders and retailers’ inventories which affect the volume of orders received by manufacturers. 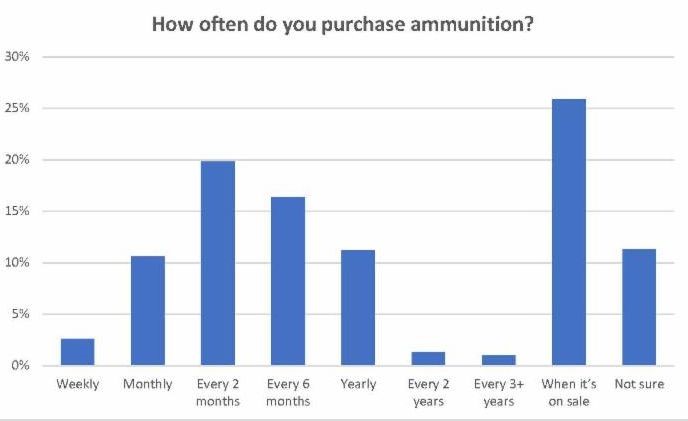 This significant portion of consumers with their various reasons for buying excess amounts of ammunition certainly had an effect on the industry’s recent record ammunition sales. “Concerns about future availability drove many consumers to buy greater supplies of ammunition than normal,” said Nancy Bacon, Vice President of Southwick Associates. “It is our opinion that, once excess ammunition supplies are shot, we’ll see a lift in sales and a return to normal, stable buying patterns – barring any new political shocks.”

Digging deeper into the purchasing habits of ammunition consumers, Southwick Associates found the average annual spending on ammunition by avid hunters and shooters was around $400, with 65 percent of them spending $300 or less each year. Only 15 percent of those surveyed reported spending more than $600 on ammunition in the past year. Another insight examines frequency of purchase.

Over the remainder of 2019, Southwick Associates will be releasing new insights and services to help companies better understand trends, sales and purchasing motivations within the hunting, shooting and personal protection markets. Stay tuned. Please contact Nancy Bacon for more information.