NEWTOWN, Conn. — The National Shooting Sports Foundation (NSSF) has released a major new report documenting the importance of hunting activities to the U.S. economy, and how the states benefit from economic impact of hunting. NSSF is the trade association for the firearms, ammunition, hunting and shooting sports industry. 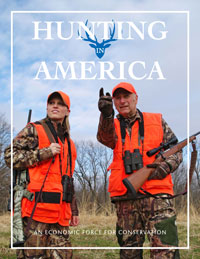 Produced by Southwick Associates, the report, Hunting in America: An Economic Force for Conservation, provides detailed information on 40-plus categories of U.S. hunting-related expenditures, which grew 55 percent, as well as state-by-state statistics for number of hunters, retail sales, taxes and jobs. The report notes an overall nine percent increase in hunting participation between 2006 and 2011. The money hunters spent in 2011 resulted in $87 billion being added to the nation’s economy and supported more than 680,000 jobs nationally.

“The major growth in spending by hunters is good news for businesses throughout the country, particularly small businesses in rural areas,” said NSSF President and CEO Steve Sanetti.

Beyond their impact on businesses and local economies, sportsmen are the leaders in protecting wildlife and habitats. When you combine license and stamp fees, excise taxes on hunting equipment and membership contributions to conservation organizations, hunters contribute more than $1.6 billion annually to conservation.

“Hunters are without peer when it comes to funding the perpetuation and conservation of wildlife and natural habitats,” said Sanetti.

Read Hunting in America: An Economic Force for Conservation or view the report as a printable PDF.

About NSSF
The National Shooting Sports Foundation is the trade association for the firearms industry. Its mission is to promote, protect and preserve hunting and the shooting sports. Formed in 1961, NSSF has a membership of more than 8,000 manufacturers, distributors, firearms retailers, shooting ranges, sportsmen’s organizations and publishers. For more information, log on to www.nssf.org.